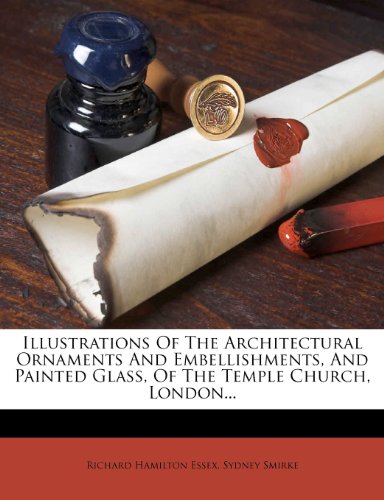 Illustrations Of The Architectural Ornaments And... 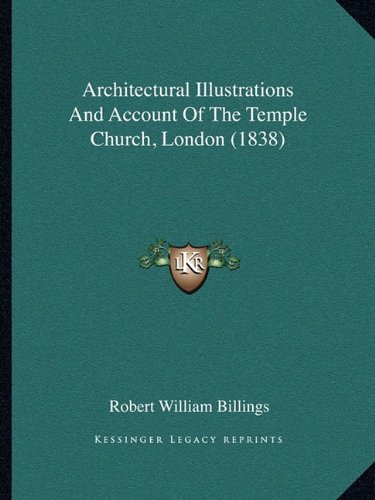 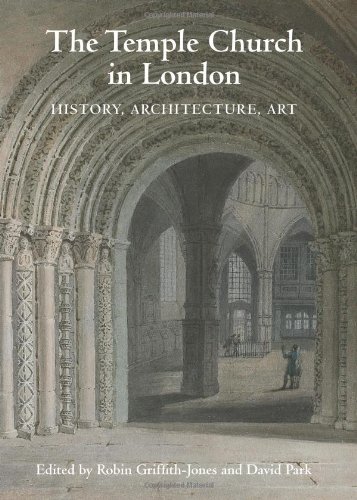 The Temple Church in London, famed for its rare circular nave called "the Round," was built by the Knights Templar in the 12th century. It is one of only three Norman round churches left in England.

History of the Temple Church

In the mid-12th century, the Knights Templar or Red Knights (so called after the red crosses they wore) had their London headquarters at a site in High Holborn. But by the 1160s, the order outgrew the original site and purchased property near Fleet Street for establishment of a larger monastic compound.

The Temple Church was consecrated on February 10, 1185 in a ceremony conducted by Heraclius, the Crusader Patriarch of Jerusalem. King Henry II may have been present at the consecration. The Knights Templar held worship services and their secret initiation rites in "the Round," the oldest part of the Temple Church.

The church was originally part of a large monastic compound that included residences, military training facilities, and recreational grounds for the military brethren and novices, who were not permitted to go into the city without the permission of the Master of the Temple.

The order of the Knights Templar was very powerful in England in this early period. The Master of the Temple sat in parliament as primus baro (the first baron of the realm). The Temple compound was regularly used as a residence by kings and by legates of the Pope.

The temple also served as an early depository bank, sometimes in defiance of the Crown's wishes to seize the funds of nobles who had entrusted their wealth there. The Temple was the scene of important negotiations leading to the signing of Magna Carta in 1215. Instrumental in these negotiations was William Marshal, whose effigy is in the Round.

The original church had a small choir, but this was greatly enlarged in the early 1200s when King Henry III expressed a wish to be buried there. The new chancel was consecrated on Ascension Day 1240. However, when Henry's will was read upon his death in 1272, it was discovered he had changed his mind and wanted to be buried in Westminster Abbey instead.

Having started out poor, holy, and dedicated to the protection of pilgrims, the Knights Templar grew rich from showers of royal gifts. Their popularity waned until, in the 14th century, they were charged with heresy, blasphemy, and sodomy, thrown into the Tower of London, and stripped of their wealth. With the suppression of the Templars, the Knights of Malta obtained control of the property.

In Part I of the 16th century play Henry VI, by William Shakespeare, the Temple Church is the scene of the start of the 15th century Wars of the Roses. In the play, the war was sparked by the plucking of two roses in the Temple garden. In 2002, the Shakespearian tradition was commemorated with the planting of new white and red roses in the modern gardens.

Later, law professors who worked in the area began to rent a portion of the space; in the early 1600s King James I granted control of the complex to their societies. Each section of The Temple — Inner Temple and Middle Temple — has its own halls, gardens, courts, and library collections, but the Temple Church is held in common by both.

The Temple Church survived the Great Fire of London (1666) unscathed, but received restorations anyway by Sir Christopher Wren (1632-1723). In 1841, the walls and ceiling of the church were renovated in the Victorian Gothic style.

On May 10, 1941, during the height of the Battle of Britain in World War II, a German air raid of incendiary bombs severely damaged the Temple Church. The roof of the Round Church caught fire, which quickly spread to the nave and chancel. All the wooden parts of the church, including the Victorian renovations, were destroyed. After the war, the Temple Church was fully restored; it was rededicated on November 1958.

Today, the Temple Church is still the the main chapel of those who work in the Temple area. It also functions as an Anglican parish church, with regular worship services and choir performancesconducted here. The head of the church bears the title "Master of the Temple," after the head of the order of the Knights Templar.

The present Master of the Temple is the Reverend Robin Griffith-Jones, appointed in 1999. He gives regular lunchtime talks open to the public, many of which have recently been on the subject of the Temple Church's role in the controversial novel The Da Vinci Code (on which more below).

What to See at the Temple Church

One might expect the Temple Church to be dark and thickly atmospheric, but later restorations have tamed its air of antique mystery. Still, it's a lovely Gothic-Romanesque church, whose chancel ("the Oblong," dating from 1240) has been accused of perfection. The church is made entirely of beautiful cream-colored Caen stone.

One of the most interesting aspects inside the Temple Church are the 10 knightly effigies that lie in the old round church. These were believed to be tombs until the post-WWII restoration revealed no bodies, but only effigy memorials.

All the knights are on their back, but are otherwise positioned in different ways: some have their legs extended straight out while others have their legs crossed; some wear tunics over their armor and others wear full-length robes; some clutch their swords, some pray, and some have their arms straight at their sides. One has no effigy at all, but only a trapezoidal sarcophagus lid.

Look also for the Norman door, and take note of the circle of grotesque portrait heads, including many silly human faces and a goat in a mortarboard. The use of gargoyles to express masons' imaginations and irreverence through gargoyle sculptures is common in churches, but it is unusual for them to be placed indoors. This allows you to examine each unique and fascinating face up close, instead of high up on a drain spout as is more usual.

The nave part of the church ("the Oblong") is lovely, featuring colorful stained glass windows, an impressive organ, and a beautiful wooden altar designed by famed architect Sir Christopher Wren. The altar was designed for the Temple Church, but was mercifully in a museum in Durham when the Temple Church was nearly destroyed in 1944. It has now been restored to its intended position, where visitors can admire the woodwork and read the Ten Commandments, the Apostles' Creed and the Lord's Prayer in handsome gold script.

In the Da Vinci Code

The Temple Church is the setting of an action-packed scene in the popular novel The Da Vinci Code. In chapters 83, 85 and 86, Robert Langdon, Sophie Neveau and Leigh Teabing arrive at the Temple Church pursuing the answer to their latest riddle:

After a careful examination of the ten knights, the group learn from an altar boy that there are no tombs in the church, only effigies.

Eventually, they realize the riddle refers to the tomb of Sir Isaac Newton in Westminster Abbey, but not before they are held at gunpoint in the church by the bad guys.

On the way to the Temple Church (chapter 82), Leigh Teabing had explained to his companions that its architecture is "pagan to the core." He told them it is "Pantheonically pagan," ignoring the traditional cruciform shape in favor of a round shape "in honour of the sun.... A not-so-subtle howdy-do to the boys in Rome. They might as well have resurrected Stonehenge in central London."

In reality, it is generally believed that the round shape of the Temple Church was patterned after the Church of the Holy Sepulcher in Jerusalem, which the Knights Templar were responsible for guarding during the Crusades. There is no evidence it had anything to do with either the Pantheon in Rome or worship of the sun. (And the more traditional chancel was added only a half-century after the Round.) There are three other round churches in England, including one in Cambridge.

The turnoff to the church is on the right side as you walk down Fleet Street towards St. Paul's Cathedral. Sometimes this entrance is closed - if so, there should be a sign on the door providing directions to the other entrance.

Quick Facts on the Temple Church

Map of the Temple Church, London

Below is a location map and aerial view of the Temple Church. Using the buttons on the left (or the wheel on your mouse), you can zoom in for a closer look, or zoom out to get your bearings. To move around, click and drag the map with your mouse.