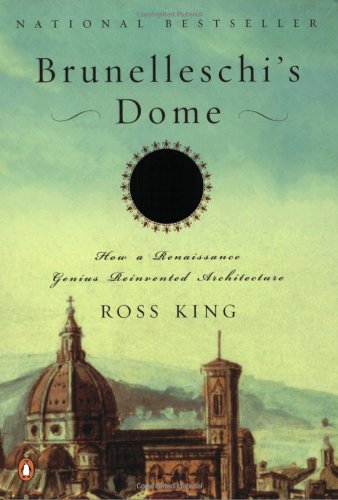 Feud That Sparked the Renaissance: How Brunelleschi and...

House of Medici: Its Rise and Fall

Food Lover's Guide to Florence: With Culinary Excursions in...

Santa Maria del Fiore (also known simply as the Duomo) is the cathedral of Florence known for its distinctive Renaissance dome. Its name ("Saint Mary of the Flower") refers to the lily, the symbol of Florence. The impressive Gothic cathedral complex includes the Duomo, the famous baptistery and a campanile.

The cathedral, the third to be built in Florence, was built on the site of the previous one, Santa Reparata, prompted by the magnificence of the new cathedrals in Pisa and Siena.

It was designed by Arnolfo di Cambio in 1294 to be the largest Roman Catholic church in the world (although the design was later reduced in size), with the first stone being laid on September 8, 1296.

After Arnolfo died in 1302, work on the cathedral slowed. In 1331, the Arte della Lana (Guild of Wool Merchants) took over responsibility for the construction of the cathedral and in 1334 they appointed Giotto as overseer for the work. His major accomplishment was the campanile, but he died in 1337.

It was not until 1355 that work resumed on the cathedral itself under a series of architects, including Francesco Talenti, Alberto Arnoldi, Giovanni d'Ambrogio, Giovanni di Lapo Ghini, Neri di Fioravante and Orcagna. The nave was finished by 1380, and by 1418 only the dome was uncompleted.

In 1418 a competition was held to design a new dome for the cathedral. The two competitors were Lorenzo Ghiberti and Filippo Brunelleschi. Brunelleschi won the competition with his distinctive octagonal design, but both were appointed architects. This arrangement did not work, and Brunelleschi soon took over sole responsibility.

Construction on the dome began in 1420 and was completed in 1436; the cathedral was consecrated by Pope Eugenius IV on March 25, 1436.

It was the first 'octagonal' dome in history to be built without a wooden supporting frame (the Pantheon, a circular dome, was built in 118-128 AD without support structures), and was the largest dome built at the time (it is still the largest masonry dome in the world). The dome also used horizontal reinforcements of tension chains of stone and iron - paving way to the imaginations of iron and steel structural reinforcements, such as reinforced concrete in later centuries.

Brunelleschi's ability to crown the dome with a lantern was questioned and he had to undergo another competition. The lantern was begun a few months before his death in 1446 and was completed by his friend Michelozzo. A huge statue of Brunelleschi now sits outside the Palazzo dei Canonici in the Piazza del Duomo, looking thoughtfully up towards his greatest achievement.

What to See at Florence Duomo

The Gothic interior is cavernous and is particularly notable for its stained glass windows (mostly 1434-1445; some designed by Ghiberti) and its marble pavement (1526-1660).

Artists who produced work for the cathedral include:

Below is a location map and aerial view of Florence Duomo. Using the buttons on the left (or the wheel on your mouse), you can zoom in for a closer look, or zoom out to get your bearings. To move around, click and drag the map with your mouse.