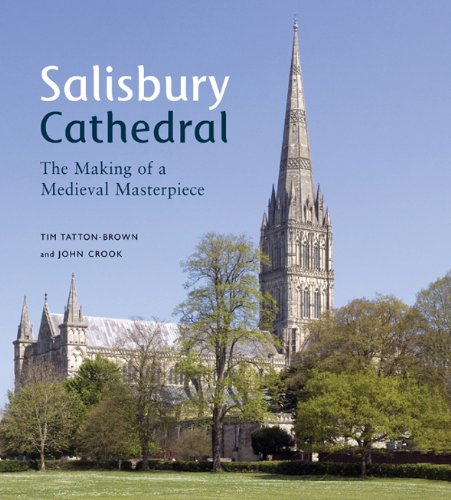 Salisbury Cathedral: The Making of a Medieval Masterpiece

Sarum: The Novel of England

Salisbury Cathedral is an elegant Gothic edifice located in Salisbury, about 90 miles southwest of London. Built almost entirely in the 13th century, the cathedral boasts the tallest spire and the largest cloisters in England. The site attracts more than 500,000 visitors each year.

The history of Salisbury Cathedral begins two miles away at Old Sarum, an ancient fortified plateau where a Norman cathedral was built by Bishop St. Osmund in 1075. The sight must have been impressive, but the location proved to be a constant headache due to its exposure to the elements and lack of sufficient water.

Finally, in 1217, Bishop Richard le Poore wrote to the Pope for permission to abandon the site for a better location two miles away, at the confluence of two rivers. The petition was granted and the clergy moved to the new site in 1219.

Construction on Salisbury Cathedral began in the Early English Gothic style in 1220. The work was completed quickly, resulting in a unity of architecture rarely seen in England. Even after Bishop le Poore moved to Durham, the builders adhered to the original design until its completion.

In accordance with common practice, construction began at the east end and worked west. The Chapel of the Holy Trinity and All Saints was completed in 1225, after which the tomb of St. Osmund was moved there from Old Sarum. Next came the choir, transepts and nave, which were complete by 1258, when the cathedral was consecrated. The elaborate west front was finished in 1255, the cloister in 1270 and the chapter house in 1284.

The only major element to be added later was the famous spire, which came along in 1310-33. But its shape matches the cathedral perfectly and is made from the same stone, quarried from Chilmark 12 miles away. The spire was a daring addition, forcing the structure below to carry a dangerous amount of weight (6,500 tons with the tower). Only a multitude of buttresses, bracing arches and iron ties have kept it from collapsing over the centuries.

The rare harmony of Salisbury Cathedral was damaged by the architect James Wyatt in 1789-92, whose "restorations" included removing the 13th-century choir screen, high altar, stained glass windows and detached bell tower, and rearranging the nave's monuments into rows. Another restoration by Sir George Gilbert Scott in 1859 attempted to put some of it back together again.

What to See at Salisbury Cathedral

Salisbury Cathedral has many notable features, but the most famous is its towering central spire. The tallest in England, it rises 404 feet tall and weights 6,400 tons. A climb of 332 steps up the tower (on a guided tour only) is rewarded with rare glimpses of the timber scaffolding above the nave and inside the spire as well as fine views of Salisbury and the surrounding countryside.

The west front was completed in 1255 and the statues were added by 1300. Unfortunately, only 10 of the original medieval sculptures survive today. Sixty statues were added in the Victorian period. They depict a hierarchy of bishops and doctors, saints and martyrs, apostles and evangelists, prophets and patriarchs below Christ in Majesty seated at the top.

Inside, the nave is striking for its great height, unusual narrowness, and strong visual rhythm due to the use of light grey Chilmark stone for the walls and dark polished Purbeck marble for the columns. The entire length of the nave is in the Early English Gothic style of the early 13th century. It has three levels: a tall pointed arcarde, an open gallery and a small clerestory.

Europe's oldest working clock (1386) is displayed in the north nave aisle. Originally located in the cathedral's belltower, it is made of hand-wrought iron. Also of note in the nave is the new baptismal font (2008), designed by William Pye. Shaped like a Greek cross and large enough for total immersion baptism, it is made of patinated bronze with a Purbeck Freestone plinth and brown patinated bronze grating. It runs constantly like a fountain, yet its surface remains completely smooth, reflecting the beauty of the cathedral.

Due to James Wyatt's modifications, there is now an uninterrupted view from the nave into the choir (which was his reason for destroying the medieval screen) and the striking modern window at the east end. Created in 1980 by Gabriel Loire of Chartres, the Prisoners of Conscience Window is colored in 13th-century hues of deep blue, reds, and yellows.

Salisbury Cathedral is home to the largest and oldest complete set of choir stalls in the country, made in 1236 from oak provided by King Henry III. The misericords, carved with foliage decoration, also date from this time, except for some in the front row which were replaced in the 17th century. The musical angels, grotesque figures and animals date from 1860-75.

Behind the choir at the far east end of the cathedral is a second small transept and the Trinity Chapel (1225), with slender columns supporting a dramatic rib vault, which shelters the tomb of St. Osmund.

The chapter house (1263-84) is a beautiful example of the Geometrical Decorated style, with rib vaults fanning out from a slender central pillar. Around the walls runs a medieval frieze (c.1250) with some 60 reliefs of scenes from Genesis and Exodus. Also on display here is the best preserved of only four original copies of the Magna Carta (1215). The chapter house windows date from c.1850 except for the east window, which was made in 1983.

Built in the 1250s and 60s, the English Gothic cloister of Salisbury Cathedral is the largest in England. It was used as a prison in the Civil War (17th century). The central garden is home to two giant cedar trees planted in 1837.

The cathedral library above the eastern cloister houses many precious manuscripts, including a 10th-century Gallican Psalter. The library is open only by appointment - write to The Librarian at the address below.

There are frequent train services to Salisbury from London, Bath and the West Counties. Buses stop at the Salisbury Bus Station regularly as well.

The cathedral is located on the north side of Salisbury's city center. Once in the city, follow the plentiful signs to the cathedral or look for the spire. (Or get your bearings in advance with our Salisbury Map.) The closest parking lots are Old George Mall or Crane Street.

Salisbury is close to Stonehenge, so many travelers and tour groups combine the two stops. Bath and Windsor are also not far. Many of the major London tour bus companies offer tour packages to Salisbury and surrounding areas.

Below is a location map and aerial view of Salisbury Cathedral. Using the buttons on the left (or the wheel on your mouse), you can zoom in for a closer look, or zoom out to get your bearings. To move around, click and drag the map with your mouse.