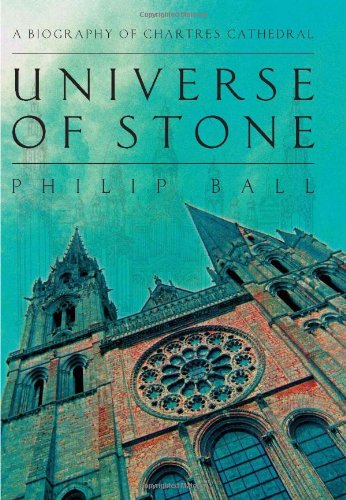 Universe of Stone: A Biography of Chartres Cathedral 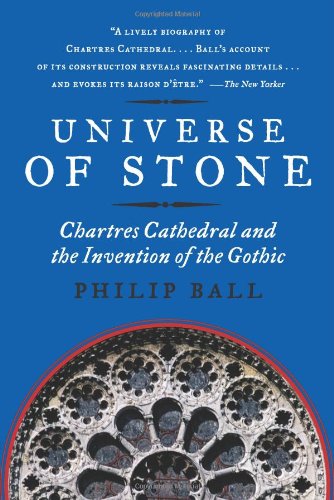 Universe of Stone: Chartres Cathedral and the Invention of... 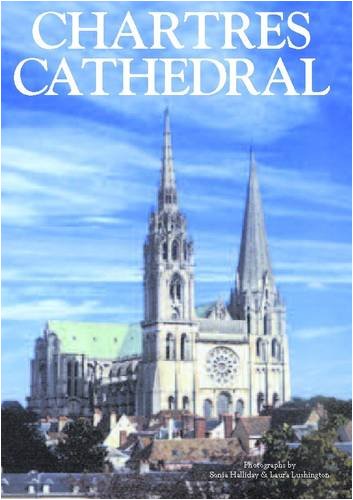 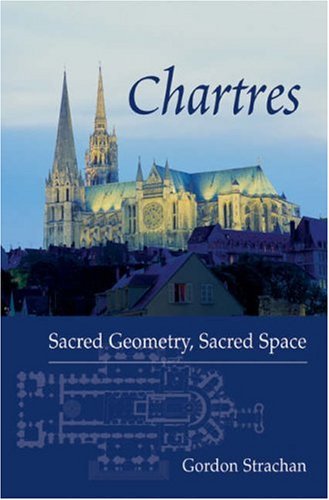 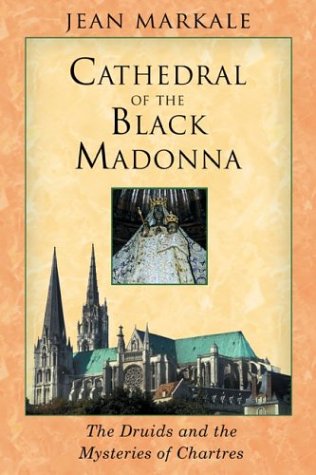 Cathedral of the Black Madonna: The Druids and the Mysteries...

Chartres Cathedral (full name Cathédrale Notre-Dame de Chartres) is located in the medieval town of Chartres, about 50 miles from Paris.

Not only is Chartres Cathedral one of the greatest achievements in the history of architecture, it is almost perfectly preserved in its original design and details. Chartres' extensive cycle of portal sculpture remains fully intact and its glowing stained-glass windows are all originals. Chartres is thus the only cathedral that conveys an almost perfect image of how it looked when it was built.

In addition to its architectural splendor, Chartres Cathedral has been a major pilgrimage destination since the early Middle Ages. Its venerable history, exquisitely preserved architecture, and centuries of fervent devotion make for an atmosphere of awe and holiness that impresses even the most nonreligious of visitors.

According to tradition, Chartres Cathedral has housed the tunic of the Blessed Virgin Mary, the Sancta Camisia, since 876. The relic was said to have been given to the cathedral by Charlemagne, who received it as a gift during a trip to Jerusalem. Because of this relic, Chartres has been a very important Marian pilgrimage center and the faithful still come from the world over to honor it.

The present cathedral is one of several French Gothic masterpieces built because fire had destroyed its predecessors. After the first cathedral of any great substance burnt down in 1020, a glorious new Romanesque basilica with a massive crypt was built under the direction of Bishop Fulbert and later Geoffroy de Lèves.

The cathedral survived a fire in 1134 that destroyed much of the rest of the town, but was not so lucky on the night of June 10, 1194, when lightning ignited a great fire that destroyed all but the west towers, the façade and the crypt.

The people despaired when it seemed that the Sancta Camisia had also perished in the fire. But three days later it was found unharmed in the treasury, which the bishop proclaimed was a sign from Mary herself that another, even more magnificent, cathedral should be built in Chartres. Donations came in from all over France and rebuilding began almost immediately in 1194. The people of Chartres volunteered to haul the necessary stone from quarries 5 miles away.

The construction project used the plans laid out by the first architect in order to preserve the harmonious aspect of the cathedral. Work began first on the nave and by 1220 the main structure was complete, with the old crypt, the west towers and the west facade incorporated into the new building. On October 24, 1260, the cathedral was finally dedicated in the presence of King Louis IX and his family.

Chartres Cathedral was never destroyed nor looted during the French Revolution and the numerous restorations never have altered its glorious beauty. It always stayed the same: a great triumph of Gothic art. The cathedral was added to UNESCO's list of World Heritage Sites in 1979.

What to See at Chartres Cathedral

From a distance Chartres Cathedral seems to hover in mid-air above fields of wheat; it is only when one draws closer that the city comes into view, clustering around the hill on which the cathedral stands.

The plan of the Gothic cathedral is a Latin cross with three aisles, a short transept and an ambulatory. The rounded east end has five semi-circular radiating chapels.

The high nave is supported by double flying buttresses, anchored by colonnettes and great abutments. The latter were lightened in appearance with niches filled with sculptures. An extra row of single flying buttresses supported the apse from the beginning and a third row was added in the 14th century.

Chartres was the first building on which buttresses were used as a structural element that determined the overall external appearance of the building. They were necessitated by the unprecedented size of the clerestory windows and the height of the nave.

The only aspect detracting from Chartres Cathedral's elegant symmetry are the mismatched west spires. The south spire is a 349-foot (105m) plain Romanesque pyramid dating from the 1140s, while the north is a 377-foot (113m) early 16th-century Flamboyant Gothic spire on top of an older tower.

In addition to the famed west front, both transepts have large rose windows, flanking towers and three sculptured portals each. This design was modeled on the rose-windowed transepts at Laon Cathedral, but the three-portal layout is unique to Chartres. In total, Chartres Cathedral has nine portals, including three salvaged from the earlier cathedral on the west portal.

The north portal, recently cleaned of industrial grime, illustrates the Old Testament and the Virgin Mary as precursors and preparations for Christ. Because the cathedral faces southwest instead of the traditional west, the north portal receives a blaze of sunlight in the evening. Between the doors in the central portal is a statue of St. Anne holding an infant Mary. Below her feet, Joachim once tended his flocks but has mostly disappeared. In 1204, Chartres received a relic of the head of St. Anne from Constantinople; the central statue was probably added in honor of it.

The statues on the right side of the central bay, from left to right, are:

Of special note among the other figures is the Holy Modesta, an elegant female figure with a happy, seductive smile, and a fat King Solomon in the right-hand portal. Among the Old Testament narrative scenes is a fascinating depiction of the creation of mankind, showing Adam emerging from behind the head of God as the divine idea becomes reality, then God kneading Adam's head into shape like a sculptor modeling clay.

The south portal, currently being cleaned, was carved between 1224 and 1250 on the theme of the New Testament, centered on the Last Judgment. In the central scene Christ appears human, mild and gentle, an image that became known as the Beau-Dieu, the "handsome God." The left bay has sculptures of martyrs; the right bay figures of confessors (saints who were not martyred). Among the former are two interestingly contrasting knightly figures: St. George as a grim older man and St. Theodore as a handsome young hero.

The west portal, known virtually since its completion as the Royal Portal (Porte Royale), was carved by 1150. The sculptures and reliefs were modeled on those in the triple west portal at St. Denis, which were mostly destroyed at the Reformation.

Decorating the recesses of the Royal Portal are elegant and elongated statues of kings, queens and figures from the Old Testament that are full of expression, gazing down on the visitor with elegant condescension. These are a visible transition from Romanesque to Gothic: the whimsical elongation of the figures reflects the former while the realistic and emotive faces anticipate the latter.

The central west portal depicts the Last Judgment, with Christ in the tympanum surrounded by the symbols of the Four Evangelists. Enthroned within a mandorla (an almond-shaped halo), Christ raises his right hand in blessing and holds the Book of Life in his left. This image of Christ is unique in cathedral sculpture and seems to equally embody his divine and human natures.

The left-hand portal centers on the the Ascension of Christ. Christ stands on a cloud, supported by two angels. Below this is a relief with four singing angels and the bottom lintel shows ten seated men (possibly the apostles) holding books or scrolls and looking up at Christ. The archivolts are decorated with symbols of the zodiac and the labors of the months.

In the right-hand portal, the tympanum bears scenes from the descent of Christ into the world, complemented the Ascension on the other side. The bottom register shows scenes from the Life of the Virgin, including the Annunciation, the Visitation, the Nativity, and the Annunciation to the Shepherds. In the middle register is the Presentation at the Temple. In the upper level is the Virgin and Child enthroned between two censing angels. The inner archivolt contains angels while the outer archivolt depicts the Seven Liberal Arts and two signs of the Zodiac (Pisces and Gemini).

Even the elegance of the exterior does not prepare the visitor for the wonders that lie within. The spacious nave is the widest in France and stands 121 feet (36m) high. There is an unbroken view from the western end right along to the magnificent apse in the east, 427-foot (128m) away. Clustered columns rise dramatically from plain bases to the high pointed arches of the ceiling, directing the eye to the massive clerestory windows in the apse.

At the east end, an ambulatory wraps around the choir and sanctuary, dramatically vaulted and divided from the latter by a magnificently carved choir screen. It was erected in the 16th century and its sculptures were gradually added over a long period between the 16th and 18th centuries. The sculptures depict scenes from the lives of Christ and the Virgin Mary.

The chancel screen includes, on the south side, an impressive astrological clock dating from the 16th century. It told not only the time but the day of the week, the month of the year, the time of sunrise and sunset, the phase of the moon and the current sign of the zodiac. Its inner works were partially destroyed in 1793.

The stone floor still bears its ancient floor labyrinth (1205), used for walking contemplation by monks and still used for meditation by pilgrims. There is just one path through the labyrinth and it is 964 feet long. According to John James, the center of the labyrinth once had a metal plate with figures of Theseus, Ariadne, and the Minotaur, figures from the classical myth of the labyrinth on Minos.

The Stained Glass Windows of Chartres

The West Rose dates from early 13th century and its three lancet windows are from c.1150. The rose window depicts the Last Judgment: Christ in judgment is surrounded by Four Evangelists and angels, then scenes of angels blowing trumpets, resurrection, judgment, heaven and hell. The left lancet is the Passion and Resurrection Window; the middle lancet is the Incarnation Window; and the right lancet is the Jesse Window.

The North Rose and its five lancet windows were a gift from Queen Blanche of Castille in 1230. The rose window depicts the Glorification of the Virgin: Virgin and Child surrounded by doves and angels, then Old Testament kings and Old Testament prophets. Lancets, from left to right: Melchizadek and King Saul; King David and King Jeroboam; St Anne and the infant Mary with the arms of the Royal House of France; King Solomon and King Nebuchadezzar; Aaron and Pharaoh.

Another very notable window is the Blue Virgin Window (Notre Dame de la Belle Verrière), created around 1150 and now part of a window in the south ambulatory aisle next to the transept.

Below is a location map and aerial view of Chartres Cathedral. Using the buttons on the left (or the wheel on your mouse), you can zoom in for a closer look, or zoom out to get your bearings. To move around, click and drag the map with your mouse.