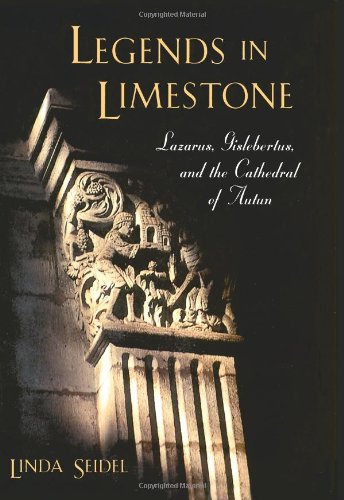 Legends in Limestone: Lazarus, Gislebertus, and the...

The Cathédrale St-Lazare (Cathedral of St. Lazarus) is the the most important historical building in Autun, Burgundy, and one of the most important Romanesque churches in France. Dating from the mid-12th century with some later Gothic additions, it is especially famed for its splendid sculptures by the Romanesque master sculptor Gislebertus.

Autun Cathedral was built as a great pilgrimage church (not originally a cathedral) to hold the relics of Lazarus, which were discovered in Autun in the early 12th century. Lazarus was the brother of Mary Magdalene and the man whom Jesus raised from the dead (John 11:38-44). His traditional tomb (when he died the first time and was raised) can still be visited in Bethany, near Jerusalem.

How did this Palestinian saint end up in France? Legend has it that Lazarus and his sister Mary Magdalene sailed to Provence, where Lazarus became the first bishop of Marseilles. He was martyred there and Autun eventually obtained his relics. Marseilles still claims to have his head. Another traditional tomb of Lazarus is in Larnaca, Cyprus.

The Church of St. Lazarus was built between 1120 and 1146 on a grand scale in the hopes the Autun would become a major pilgrimage destination (and money maker) like nearby Vézelay, where Lazarus' sister Mary was claimed to be. The church was consecrated by Pope Innocent II in 1130.

The church was decorated with sculptures and carvings by Gislebertus, who is widely regarded as one of the great Romanesque sculptors. We know his name because, unusually, he signed his work - an inscription in the tympanum says Gislebertus hoc fecit, "Gislebertus made this."

A variety of Gothic additions were made to the church, including the great spire (raised by Cardinal Rolin), after a fire in the 15th century. But the main core of the church and its magnificent sculptures remain firmly Romanesque.

The magnificent sculptures survived the French Revolution thanks to local clergy who, ironically, did not like them at all. In 1766, the canons decided the portal sculptures were mediocre and out of date and accordingly covered them with a thick layer of plaster and painted a more contemporary design over it. Christ's head kept protruding out of the plaster so they hacked it off and cast it aside. It survived in a local collection before being given to the Musée Rolin in 1895. It was returned to its proper place in 1948.

This saved them from certain destruction a few decades later, when the tomb of Lazarus and the north tympanum (which had not been plastered over) were smashed to bits by revolutionaries. In 1837, an Autun clergyman began chipping away the plaster over the main portal and was surprised to find the almost perfectly preserved original tympanum underneath.

What to See at Autun Cathedral

The Cathedral of St-Lazare has a ground-plan in the form of a Latin cross, with an aisled nave, a plain transept and a three-stage choir with a semicircular end. The Gothic spire dates from the 15th century. Walk uphill around to the back for a fine view of the tower and mostly Gothic east end.

The west towers were rebuilt in the 19th century, based on the Romanesque style of Paray-le-Monial. Unfortunately is difficult to get much of a view of the west front, as it is backed right up against other buildings, but a roomy view of the north side can be had from an attractive plaza with a fountain and outdoor cafés.

The interior of Autun Cathedral is austerely Romanesque and rather dark. Reflecting the town's Roman heritage, the pilasters and arcading are modelled on the Roman city gates. The cathedral's side chapels are of some interest; one on the right has late-medieval murals of angels and the third one on the left contains the fine Martyrdom of St Symphorien by Ingres (1834).

Near the entrance to the chapter house on the south side are the 16th-century funerary statues of Pierre Jeannin and his wife Anne Gueniot. Jeannin's wisdom saved Burgundy from the massacres of St. Bartholomew's Day on August 24, 1572. He insisted on waiting for written instructions, declaring, "One should never be in a hurry to obey the King's orders if the King loses his temper."

The glory of the cathedral is the Romanesque tympanum(c.1130) over the west door in the narthex, which depicts the Last Judgment. In the center, Christ presides in majesty from inside a great mandorla (almond-shaped nimbus) held aloft by angels. Beneath his feet is the Latin inscription identifying the sculptor: "Gislebertus made this."

To the left, apostles incline their heads in veneration towards Christ, except for St. Peter who turns the other way to conduct righteous souls into heaven. Above the apostles, an enthroned Virgin Mary extends her hands in blessing while an angel trumpets to waken the dead.

On the far left, the Redeemed ascend to heaven by grasping the legs and wings of angels. One person is being hoisted into the Heavenly City by an angel. The heads of those already there are shown under arches. St. Peter oversees the operation with a damaged key, taking one righteous soul by the hand. Along the bottom, a Latin inscription proclaims the joys of Paradise.

Below, more of the redeemed rise from their graves with the help of angels and rejoice. Towards the left, a person sits on his grave and unwraps his grave clothes, looking up in wonder. Among the saved can be spotted two bishops and two pilgrims. The pilgrims have symbols on their bags - a Greek cross for the pilgrimage to Jerusalem and a scallop shell representing Santiago de Compostela.

On the right is the Weighing of Souls, presided over by an elegant Archangel Michael who leans on the scales to help them go in the right direction. Meanwhile, a devil attempts to sway the scales in his favor by hanging on them.

Further to the right, another devil torments the Damned. A woman is receiving the standard punishment for lust - a snake grawing at her breast - while the demon pokes her with a pitchfork. Next to her, three people are strung together by their necks. Along the bottom is an inscription warning against the horrors of Hell. On the far right, divided from the horrific scene by a vine, an angel trumpets to awaken the dead.

Below this, more of the damned march in torment. The most interesting are towards the right: a greedy man clutches his money bags, a lustful woman has her breasts grawed by snakes (again), and one sinner is deposited into Hell by two giant claws around his head. Two people sit on their tombs in their grave clothes. Compared with the joyful parallel on the left, they do not look to be in any hurry to cast them aside and stand up.

The capitals of the portal are carved with biblical and traditional scenes. One depicts St. Jerome removing a thorn from a lion's paw; another shows the Presentation of Christ.

The capitals in the nave and choir were also expertly carved by Gislebertus. Owing to a near-collapse in the 19th century, the capitals under the central tower were replaced by replicas; the originals can be viewed up close and personal in the upstairs chapter house (entrance to the right of the choir). Among the scenes on the chapter house capitals are the Flight into Egypt, God Questioning Cain, the Hanging of Judas, and the Adoration of the Magi.

The tympanum is framed by two archivolts. The inner one has carved foliage while the outer archivolt consists of magnificently detailed medallions representing the four seasons, zodiacs, and labors of the months. These are possibly the best-preserved sculptures on the theme anywhere, providing a fascinating insight into medieval life. Most of the Labors of the Months relate to the vintage, since this is wine country.

Below is a summary of each roundel in the archivolt, from left to right. Click on the thumbnails for larger views.

Below is a location map and aerial view of Autun Cathedral. Using the buttons on the left (or the wheel on your mouse), you can zoom in for a closer look, or zoom out to get your bearings. To move around, click and drag the map with your mouse.